The Yaesu FT-857 is a little marvel. Crammed into the enclosure is an HF, VHF and UHF transceiver with most of the modern bells and whistles that anyone could want, and which can supply 100 watts on 160-6 meters, 50 watts on 2 meters, and 20 watts on the 440 MHz band. It is capable of operating in the CW, AM, SSB, FM, and digital modes. The engineers have built what seems to be intended as a mobile transceiver, suitable for installation in a vehicle, with a removable face plate which can be mounted separately from the electronics package.

The Yaesu FT-857(D) certainly has a popular following (469 reviews at eham with 4.5), in spite of several drawbacks, not the least of which is its 14+ year-old design. The main one is its small, orange-tinged display. Contrary to to the popular press’ claims, it isn’t any easier to see in daylight than its competitors.

The Yaesu FT-857 is the mobile version of Yaesu’s ubiquitous FT-897 transceiver. Yaesu designed the 857 with size in mind and claims it is the most compact 100 watt HF/VHF/UHF transceiver on the market today. It is certainly suitable for mobile operation, but can also be quite usable for portable or even occasional desktop use.

The current version of the FT-857 is designated as the FT-857D. The main enhancement of the ‘D’ model is the inclusion of the five 60 meter frequencies available to US amateurs. These may be accessed via a special pre-initialized memory bank. Where I refer to the FT-857 below, it applies to all members of the FT-857 family, including both the ‘D’ and non-‘D’ versions. 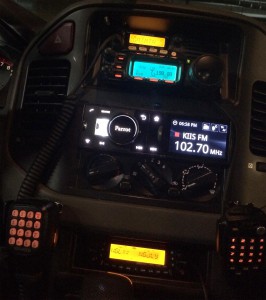 There is not a lot of real-estate on the front of the FT-857 and Yaesu must have spent considerable time laying out the front panel to be efficient without being cramped. And, they’ve largely succeeded: Even with its small form factor, it’s a remarkably comfortable rig to operate. The controls are logically placed and easy to access and manipulate. All the controls are lighted so they can be easily located in the dark or with only a quick glance. Many are situated around the perimeter of the front panel, giving each button its own unique location or tactile feel. This further enhances accessibility. For some reason, this physical layout is easy to learn and soon seems as natural than the more conventional front-panel of the FT-897, at least to me.

An unfortunate compromise in the design of the FT-857 places the microphone jack behind the front panel plate, making it is necessary to remove the front panel to change microphones. The arrangement makes sense in a mobile environment, where one would tend to use one of the standard Yaesu handheld mics exclusively. And, realistically, this design probably makes the mic connector more secure. However, when used as a portable rig, you’d probably want to unplug the mic before packing and transporting the rig, something which becomes a bit more involved on the FT-857. It also makes fabricating an interface for a non-standard microphone a bit of a challenge, since any cable termination would have to take into account the close fit behind the faceplate and have a round cord capable of making a sharp 90° bend to exit the rig. Perhaps Yaesu should offer a 2″ male-to-female RJ-45 mic extension cable for the rig, just for this scenario.

The positive side of the removable face plate is that, with the optional YSK-857 separation kit, the front-panel/head of the rig can also be remotely mounted on the dash, allowing the bulk of the rig to be stored out of sight wherever it is convenient — another nod to mobile operations.

The front end sensitivity (even in the D model) takes a back seat to every other current offering. To be honest, in a mobile scenario this fact isn’t particularly important, but could be under the right (wrong?) circumstances. The transmit keying line can handle most mobile amplifiers without a keying buffer, which is convenient. However, if you use an auto coupler or a tune device, and an amplifier, you’ll have to build you’re own “Y” adapter cable.

The power cord is actually a dongle, and an extension cable with the fuses included which might be a drawback if you R&R the radio frequently. There is another, potential drawback, if you use one of the many after-market devices which draw power from the radio (i.e. antenna controllers). The rear panel ports are protected with a 3.5 amp, surface-mounted fuse. It is not an easy task to replace, and requires special tools. In my opinion, this negates using the ports for screwdriver antenna power.

My biggest beef: The FT-857 does not have a manual notch filter, relying instead on a DSP-driven auto-notch filter. However, to be frank, the auto-notch simply doesn’t do its job, leaving the user with no good option for suppressing carriers within the passband.

Obviously, you can’t pick your parents, otherwise Ozzie and Harriet would have had thousands of children. However, who your parents are can have a huge impact on how long you live. Diseases that can cut your life short, like heart disease, Alzheimer’s, and most types of cancers, have a strong genetic connection.
Here is a detailed article that explains how you can avoid or reduce the impact these deadly diseases that you might have inherited.

Death of Nigeria’s TB Joshua: The controversial pastor will answer to God now

Why Is China Turning Up the Heat on Taiwan? A Debate